Premarin Cost and How Premarin Can Help With Menopause Symptoms 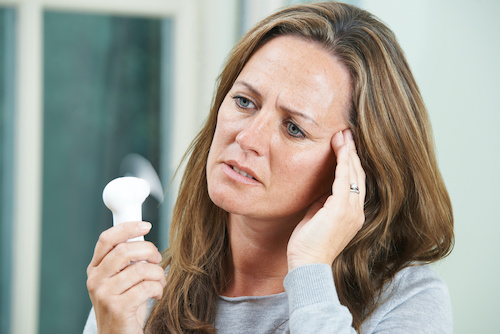 Did you know that, according to an article published in BMC Women’s Health, there is an estimate that up to 85% of postmenopausal women have had a symptom associated with menopause at a certain point in their life?

From hot flashes to vaginal dryness, menopause symptoms can be incredibly unpleasant. If you’re a woman who’s dealing with menopause symptoms, then you might be looking at Premarin cost and how it can help you alleviate these symptoms.

“Once I know Premarin’s price, are there ways I can save when buying it?”

“What menopause symptoms does Premarin alleviate?”

“Are there any side effects I should worry about?”

When you’re looking at all the medications out there that might help you alleviate your symptoms, it can be exhausting to go through all the details of every single one. It doesn’t help that you’re suffering from a hot flash while you madly scroll through the Internet looking for answers.

That’s why we’ve put together this guide on Premarin. By giving you the information you need, you can get the medication you prefer and ease your symptoms. Read on to learn more.

When it comes to the cost of Premarin, it’s worth paying for. If you’re a woman experiencing menopause, then you’ve probably heard of this drug, which is a brand-only conjugated estrogen medication. Because there aren’t any generic alternatives that work as well as Premarin, it’s the only option for many women.

The cost of Premarin can be over $200 a month, which is a lot compared to the generic option that costs $50 a month. This means spending $2,400 a year, which seems like a lot, even if you’re treating the worst of menopause symptoms.

Fortunately, there are some ways you can save on Premarin. By using some of the following strategies, you’ll only have to break into a sweat when you get the rare hot flash, instead of doing so because of the price of this medication.

Before we go into the ways to save on Premarin, we’ll answer the question: “What is Premarin?” By going into the details of this drug and how it works when it comes to treating the symptoms of menopause, you can decide if this drug is for you.

By definition, Premarin is the brand-name version of conjugated estrogen used to treat menopause symptoms. It comes in tablet form. Even though there are alternatives, Premarin is the best and most popular, which is why so many people choose to purchase it despite its price.

Conjugated estrogen tablets contain the estrogen that you produced in much lower amounts before menopause happened. This mitigates the symptoms of menopause, which can come as quite a shock to you and make you completely miserable.

When it comes to doses, Premarin is available in three different ways. Doses include 0.3 milligrams, 0.625 milligrams, and 1.25 milligrams. Depending on how much estrogen you need, you can choose the dose that works best for you according to your doctor.

Additionally, you can buy Premarin in a set of 28 tablets, 56 tablets, or 84 tablets. This depends on how long you plan to take them. Considering that menopause usually lasts around a year, you are likely to be taking these tablets for a year.

If you’re having any ovary problems because of your menopause, then Premarin is perfect for treating this. If you want to maintain the sexual development you’ve had your entire life, then Premarin will help you.

During menopause, which usually begins at the age of 52, your ovaries are no longer releasing eggs or producing estrogen. This can have the unwanted symptoms of mood swings, night sweats, and mood swings.

When you take Premarin, you’re putting estrogen back into your body. That’s why it’s so effective at treating these symptoms. Additionally, Premarin can help you during other stages, such as premenopause and postmenopause.

During premenopause, which usually occurs in your mid-forties, you start to have menstrual cycle irregularity and lower estrogen levels. This causes problems such as mood swings, night sweats, and hot flashes.

During postmenopause, the final stage which occurs for the rest of your life after you’ve gone through menopause, you have additional symptoms.

At first, some will be familiar, such as hot flashes. New symptoms include those that come from vaginal atrophy, which can make intercourse painful. These can increase as you get older.

How Does Premarin Work?

It’s also important to answer the question, “How does Premarin work?” This is because you need to think carefully about getting a prescription for a medication that changes the hormones in your body. Even though it can help you with many of the symptoms of menopause, it’s a serious shift in hormones that you should discuss with your doctor.

Premarin is used to raise the amount of estrogen in your body. It’s for anyone who needs these additional hormones in order to live life well or assuage the symptoms of menopause. For this reason, Premarin is used not only for menopause but also for the delayed onset of female puberty.

It’s also used by women who have had their ovaries removed (because of pregnancy issues or ovarian cancer, for example). Additionally, Premarin is used to treat female hypogonadism, vaginal inflammation, and vulvar atrophy.

It’s also used to strengthen the bones of women who have gone through menopause since the lack of natural estrogen leaves their bones weak and brittle. Finally, Premarin can also be used in the treatment of prostate cancer in men and breast cancer.

When it comes to the specific symptoms of menopause Premarin treats, these include:

Because all of these symptoms are caused by the lack of estrogen in your body, Premarin gives you the estrogen you need so that these symptoms are regulated. However, you will want to speak with your doctor to ensure that you are not at risk for other issues when taking Premarin. We will review these potential issues at the end of this article.

Now that you know how Premarin can help with menopause symptoms, you might be more inclined to buy it. However, with its high cost, it helps to know about the different ways you can save on this medication.

If your insurance you have already covers the cost of Premarin, then you’re all set. However, some insurance companies require you to go through an authorization process, which can feel like a long time when you’re struggling with the symptoms of menopause.

For this reason, we recommend enrolling in a program that will make it easy for you to pay for Premarin the moment you start experiencing symptoms of premenopause. That way, you can have those symptoms covered as they begin, and then when the unrelenting symptoms of menopause occur, you’ll be prepared.

On Premarin’s website, you can input your zip code along with what insurance type you have to find out how much you can expect to pay. Before doing any of the steps above, put in that information to find out if it’s already affordable for you.

Use a Canadian Pharmacy

Another alternative is to use a Canadian pharmacy. As opposed to American pharmacies, Canadian pharmacies stock much cheaper medication because of the socialized healthcare system in Canada. If you’re close to the border, you can cross over to buy medication. Additionally, you can order easily online.

This is an incredibly affordable alternative. Let’s say you’re taking 28 tablets a month. At a Canadian pharmacy, this can cost between $35.95 and $44.95. Compare that to the monthly cost of Premarin sold in US pharmacies, which can be $200 or higher. You’ll be saving huge amounts of money.

Fortunately, Canada has a great health system, which means that even though you’re buying cheaper medication, it’s still going to be high-quality. Healthcare professionals will be providing you with the medication you need. You can trust that it will work just as well as the medication back home without putting your health at risk.

Additionally, you can use a special card to save on the cost of Premarin. This is available through Premarin. If a local pharmacy near you is a participating pharmacy, you can get discounts depending on what you’re expected to pay out of pocket once insurance has covered part of the cost.

First, check with your insurance about how much you’ll have to pay out of pocket. If your out-of-pocket charge is $85 or less a month, then your Premarin savings card will cover $55 or less so that you’re only paying $30. If your out-of-pocket charge is more than $85, then the card will cover $55 of the cost while you pay the rest.

Additionally, you can use coupons to save money on Premarin. Get in touch with your local pharmacies to find out how you can save money. There might be pharmacy-specific coupons available. They might also have a card similar to the one Premarin offers.

Side Effects of Premarin

Before you decide to buy Premarin and save money by using one of the strategies we’ve given, you should know what the side effects of Premarin are. This will help you decide if it’s the right drug for you. Side effects include:

While not all of these are serious side effects, some can be a sign of something serious going on in your uterus. Because of the hormonal change in your body, taking Premarin can heighten your risk of cancer of the uterus.

Therefore, you should speak with your doctor carefully of signs of this, such as vaginal bleeding. That way, you can stop taking the tablets if necessary.

Keep in mind that types of estrogen can also cause birth defects. So, if you’re pregnant or choosing to become pregnant, you shouldn’t take Premarin. Keep in mind that many symptoms of pregnancy and menopause can be similar—so discuss this with your doctor, too.

Do You Need More Information?

You need more information on Premarin cost or how to save? Maybe you want to speak with a professional to find out if it’s the right treatment for your symptoms of menopause. Whatever information you need, we’re happy to help.

Here at Pricepro Pharmacy, we’re experts when it comes to the medications you need. In addition to helping you find the right medication for you, we can help you save money. This is because we’re a Canadian pharmacy with Canadian prices for Americans. To learn more about how we can help you, visit our contact us page.