Generic Drugs vs. Brand Name: Are The Differences Big Enough? 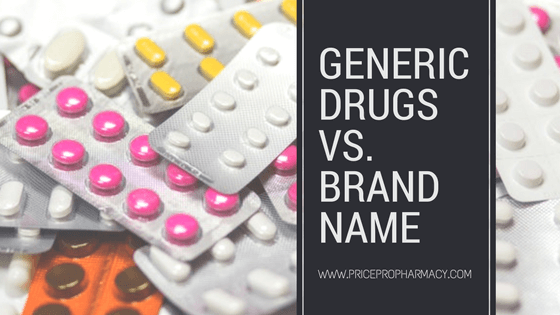 We’ve all stood in the drugstore aisle or at the pharmacy counter pondering why different packaging and different brand names of medication means paying a very different price. While we’re familiar with brand name drugs and their slogans and logos, the generic drugs positioned directly beside them feature the same active ingredients, and often the same manufacturing process. So what’s the difference between generic drugs vs brand name?

When it comes to treating illness, whether it be a crippling disease or a common cold, we all want what’s best for ourselves and our loved ones – so are the differences big enough between brand name and generic drugs to make us choose cheaper drugs over their well-marketed counterparts? What’s the difference between Tofranil and generic Imipramine?

In this post, we’ll take an in-depth look at the major differences behind generic and brand name drugs, as well as debunk the legal fine print associated with the sale of pharmacy drugs.

The price tag is always the defining factor when deciding generic drugs vs brand name. With many industries and products, consumers will instinctively choose the cheaper product to save money, but medications and drugs can make us second guess our choices.

The American Association for Accessible Medicines (AAM) notes while brand name drug companies don’t always have to compete with their competition, generic brands of similar medications do – resulting in lower prices for consumers. When the AAM conducted a third-party abandonment study, they found that new patient abandonment rates for brand name drugs are 266% higher than their generic counterparts. The AAM further states in a 2017 report that generic drugs have saved customers in the US alone, an approximate $1.67 trillion since 2007.

Cost to the consumer isn’t the only financial difference associated with generic and brand name medications. Scientific American reports that the average cost for a pharmaceutical corporation to develop a new drug regularly exceeds $1 billion and can take over 10 years to perfect and release to the public. Another study from the Journal of Health Economics, modestly estimates that drug development prices can average about $802 million, while the Tufts Center for the Study of Drug Development estimates upwards of 2.5 billion.

Besides the costs associated with drugs on-shelf, the single biggest difference between generic drugs vs brand name products is whether or not the drug itself is still under patent protection by the company that developed its chemistry. When a pharmaceutical company develops a drug, they usually receive a patent that gives them the sole ability to product the drug for about 20 years. This patent dictates that other companies are not legally permitted to sell the compound during that time until the patent expires.

When this patent expires, companies may begin to manufacture the drug compound and sell it at a reduced cost – thanks to the elimination of the massive drug development costs. These companies will manufacture a generic brand of the same medication and produce it at a lower unit cost, turning a profit from a drug that they did not develop. When a brand name drug becomes generic after its patent expires, one specific drug is given an exclusivity grace period of about six months – at this point, any manufacturer that can prove it’s capable of producing a quality drug consistently able to achieve the same drug concentrations in the blood may produce the drug, pushing prices down again, and again.

In order to market and sell a drug as a generic brand, generic drug manufacturers must be able to produce a drug that not only contains the same active ingredient as its brand name counterpart, but in the same dosage form, at the same concentration, and for the same route of administration. These drugs may appear different, in terms of shape, size, colour, and may even include different inactive ingredients like preservatives, binding agents, dyes, and even flavour.

In order to achieve FDA approval to sell the generic brand, manufacturers must submit additional paperwork in accordance with what is called good manufacturing practices (GMP) to demonstrate that the product will be as stable, reliable, and as predictable as the brand name drug. The FDA may approve this on the rate of disbursement at the same rate as the original, in turn able to determine that both products are biologically equivalent. If they are able to react the same within the human body, approval may be granted to a generic brand.

In a recent HuffPost article, Michael White, Pharm.D., Professor and Head, Department of Pharmacy Practice, University of Connecticut, tells us that rare individual variations of generic drugs may contribute to allergic reactions caused by inactive ingredients included in generic brands. There may also be slight variations in drug purity, as well. If a person should be prescribed a brand name drug, and switches to a more cost-effective medication, they may encounter a concentration that is approximately 3% lower than the brand name drug.

In short, the average person should encounter no perceivable differences between generic drugs vs brand name.

The Placebo effect can have an interesting impact of the effectiveness of drugs and medications. The psychology of more expensive medications can contribute to a translation of perceived health benefits, despite the fact that medications are, for the most part, identical. The Placebo Effect aims to understand neurobiological responses of action in pain relief. Placebo itself is a substance with no active therapeutic effect, given in order to deceive the drug-taker into feeling the psychological phenomenon of improvement of condition.

In a University of Cincinnati Neurology study published in 2015, Parkinson’s Disease patients were given two different medications – one a more expensive brand name, and one a less- expensive generic brand.

The drugs that were given were essentially the same, yet differed in terms of means of production, making them appear different and cost less; yet for the study, patients were not told that both shots were only comprised of saline solution. The study found that when given the first more expensive drug, motor skills were improved 28% over that of the less expensive drug – despite the fact that no active medical ingredient was administered. These results imply to the authors of the study that high expectations on cost, translate into perceived health benefits.

For most, the differences between generic drugs vs brand name will amount to very little. When we’re in a pharmacy searching for something to help a headache, or a sniffle, chances are we may select the drug that we’ve seen in media, or television, or have some personal experience with, whether that be from a friends’ recommendation, or elsewhere. Alternatively, cost will always be an attractive incentive to spend less on drugs when the population is armed with the knowledge that all generic drugs are basically identical remakes of their brand name originators.