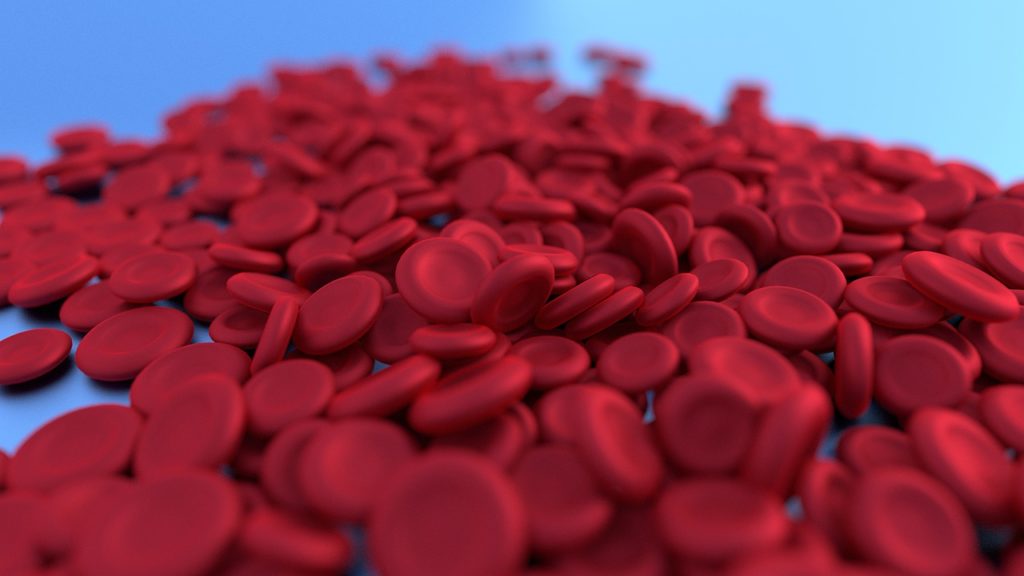 Anemia is a medical condition characterized by low red blood cell count or mass (hemoglobin).  This can be caused by blood loss, decreased production of red blood cells, or increased red cell destruction.  Some common forms of anemia include iron deficiency, vitamin B12 deficiency, thyroid disease, and liver disease.  Patients with certain blood or bone marrow cancers may also develop anemia.  Individuals with anemia often develop symptoms when their hemoglobin is very low or there is a rapid drop in hemoglobin.

Symptoms typically include fatigue, low energy, exertional shortness of breath, and pale skin.  Severe anemia due to hemorrhage may lead to death, particularly in elderly individuals with chronic heart or lung disease.

It can be caused by a variety of conditions.  Doctors most often categorize the cause based on the size of the red blood cells on laboratory tests.  They look at a parameter called the MCV (mean corpuscular volume) – this is the average volume of red blood cells in you serum.  Individuals can have red blood cells with low, normal, or high MCV.

Low MCV (microcytic anemia) is typically caused by one of the following conditions:

Normal MCV (normocytic anemia) is usually caused by one of the following:

High MCV (macrocytic anemia) is frequently due to one of the following:

Blood loss most commonly results from:

Iron deficiency in an individual > age 50 is colon cancer until proven otherwise.

Increased red blood cell destruction may occur due to the following conditions:

Decreased red blood cell synthesis can be caused by the following:

How Common is Anemia?

It is exceedingly common in the United States and responsible for frequent primary care visits.  Common causes include iron deficiency, vitamin B12 deficiency, chronic kidney disease, gastrointestinal bleeding, and surgical blood loss.  Cases that have an unclear etiology or that are associated with other blood cell line abnormalities typically require referral to a hematology-oncology specialist.

In 2008, about 98 million people over age 80 were diagnosed - the word population at that time was approximately 6.7 billion.  Approximately 3%-50% of elderly men and 3-40% of elderly women have anemia.  Hospitalized older adults have the highest prevalence.  Nursing home residents are also at increased risk.

The most common symptoms of anemia include:

Symptoms typically occur in patients with significantly reduced hemoglobin or in those who have a rapid reduction in hemoglobin levels.  Severe cases can lead to increased heart rate and confusion.  Patients with chronic lung or heart disease may develop worsening of their conditions and chest pain.

Patients may have symptoms related to the cause of their blood loss, for example:

Signs of anemia may include increased heart rate and pale conjunctiva, mucous membranes, and skin.  Individuals taking oral anticoagulants or who have sustained trauma may have large ecchymosis or hematomas on physical examination.  Patients with underlying cancer may be cachectic.  Vitamin B12 deficiency is associated with a positive Romberg sign – during this test, your doctor asks you to maintain your balance standing with your eyes closed.

If you are over age 50 and have evidence of iron deficiency anemia, your doctor will likely refer you to a gastroenterologist to undergo an upper endoscopy and colonoscopy.  These tests are done in order to rule out gastrointestinal cancer.

If you are having chest pain or difficulty breathing, you doctor may obtain a chest x-ray, EKG (electrocardiogram), and ultrasound of the heart (echocardiogram).

The treatment of anemia is based on its severity.  Severe anemia due to blood loss often requires blood transfusion with packed red blood cells.  Less urgent forms of anemia may be treated with a variety of therapies depending on their cause.